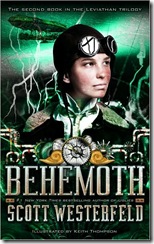 Potential Spoilers if you haven't read the first book in the series.

For all that haven’t read the first book:

This is the second book of an exciting adventure fantasy based on World War One about war between two types of people; one that uses machines and one that uses fabricated animals for everything.

This continues the story of our two main characters, twelve year old Alek, who was on the machine side and was the Arch Duke of Austria-Hungary. He was taken away by his teachers to protect him when his parents were killed. Deryn was on the animal’s side and was pretending to be a boy so that she could join the air service.

The Leviathan is a giant, flying, fabricated whale with guns on top (a war ship).
In this book it is heading for the Ottoman empire with Alek and Deryn on board, and they meet some clankers on the way.
They’re heading straight for an empire of trouble, with only one family in the empire they can trust.

This is extremely action packed with quite a few surprises all mixed up into one super book!

There is a new type of weapon invented by Mr Tesla, a radio inventor!
The war’s still going on and Alek has adopted a ‘pet’.

P.S. if you want to see the review for the leviathan you'll find it under the Scott Westerfeld label
Posted by Adele at 10:25 No comments: