Guardian of the Gate | Michelle Zink 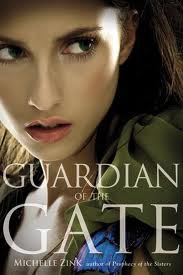 Guardian of the Gate by Michelle Zink was the second book in the ‘prophecy of the sisters’ trilogy.
It follows the story of 16 year old  Lia Milthorpe as she and her friends try and find a way to end the prophecy of the sisters. The prophecy determines that either Lia or Lia’s sisterwill be defeated. Both of them have known this from the beginning of the book, but it’s a question of which one of them will survive? The Guardian? Or the Gate?
Although it was an enjoyable read, I found parts of it difficult to follow as there were lots of references to the first book (which I haven’t read) and I think that the first book told you things about the main character, Lia, and her sister, Alice, that were quite important to the second book.
All in all though it was a really good book, defiantly read it, but I would say read the first one to start with.
Posted by Adele at 06:00 No comments:

Book Trailer | Nancy Tillman 'The Crown on your Head'