The Fire Within by Chris d'Lacey - Review + Interview

It starts in the small and rather odd town of Scrubbley, where a man called David seeks a home while doing University/College. David finds a place with only two occupants, a woman and her daughter. At first they seem like very ordinary people, the daughter Lucy is just what a small child should be like, imaginative and slightly rude. Mrs. Pennykettle (Lucy's mother), makes pottery, not just any pottery, but dragons. Her and Lucy's lifes seem to revolve around dragons, as a housewarming gift, David is given a dragon with a notepad and a pencil in his hand. They tell him to try and speak to it, strangely, the dragon beings to write, giving him ideas for a story to give to Lucy, based on a true story, one that continues throughout the book.
I give it 3 stars out of 5, I think it is mainly for children up to 13, interesting and different.
Interview:
Which is your favorite book of all time?
The Hobbit by JRR Tolkien

Which genre of reading are you most interested in?
Nothing specific. I liked Science Fiction when I was younger.

Did you read or write at all when you were a kid?
I read (comics mostly) but I didn't write.

When did you start writing?
When I was 32.

Out of all your books, which is your favorite?
Dark Fire

Out of your characters, which one is your favorite?
Bonnington!

When and why did you get into writing?
When I was 32 and to try something different from songwriting.

Are you currently writing anything now?
The next dragon book, as yet untitled.

And the random question (do not be offended, it's just a bit of fun
and it is interesting to see replys)....
If you accidently swallowed a T.V, and it was electricuting you, how
would you stop it?
I like to think I'd pull the plug out!

I just wanted to pop in and say, in the next couple of weeks my darling of a designer is going to produce a proper graphic for Young & Un:Bound. He has some amazing ideas and I can't wait to see what he produces.
Posted by Adele at 04:44 3 comments:

Email ThisBlogThis!Share to TwitterShare to FacebookShare to Pinterest
Labels: general

The Fall by Garth Nix 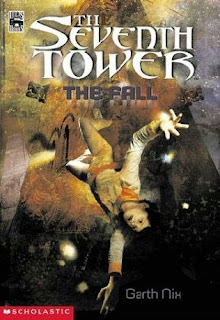 "The Fall" is the first book in "The Seventh Tower" series. It is about a boy who lives in a castle, along with other high or low ranking dormitories, and they have all never been to the world outside of the castle.
The world he lives in is always dark, there is a veil which keeps it dark, this is important to uphold the rule of magic.
When any of the "Chosen" turn thirteen, after, on the Day of Ascenation where they all enter the spiritual world (Aenir) to get a Spirit Shadow. When the Chosen are under the age of thirteen, they are given a Shadow Guard, which is similar to a Spirit Shadow but less important. When his father has disappeared on a mission for the empress, he has the families primary sunstone.
All of the Chosen have at least one sunstone, they can be used for many things: Healing, Music, Heat etc. But a primary sunstone is essential to enter Aenir, if you don't have one you join the Underfolk who work as servants for the Chosen. Desperate to get a sunstone, he tries to still a primary sunstone from the Seventh Tower. He falls back through "The Veil" and falls to a place he is not familiar with. He begins a quest with a "mad-girl" back to the castle.
I think this is a great science fiction book. It is about a whole other world, the author (Garth Nix) did a great job of it and I look forward to reading his other books.
Pizza
Age 14
Posted by Peter at 22:53 1 comment: 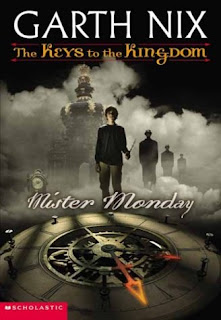 This is a call for anyone under 16 who would like to review for Y&U?

The guidelines are simple any book suitable for children, teen and YA suitable for younger readers. Bad language is not permitted on Y&U for obvious reasons. That's about it. No particular time commitment is required, if you send me your email address, age and handle I will invite you to blog on the site, if you prefer not to be an accessable presence online then like MJ and Zobdy you can email me the reviews and I shall add cover images and pop them up with credit to your handle.

I have no issue with my team requesting books on the basis of their work for Y&U but would ask that you be respectful of our relationship with publishers, if you request a book, please review it, if they send it unsolicited then great if you can, if you don't fancy it perhaps offer it up as a giveaway or pass it to another member of the team.

I hope I will hear from one or two of you out there to really invigourate this new
Posted by Adele at 05:33 No comments:

Email ThisBlogThis!Share to TwitterShare to FacebookShare to Pinterest
Labels: hagelrat

The Giver by Lois Lowry 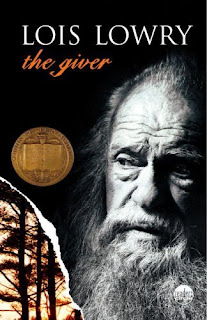 Our class was asked to read this book before school started again by my English teacher. To be quite honest our English teacher treats us like we don't read much, but most of us don't, just me and a few friends. I also thought it would be a book that would be an easy read, I was right, read it in 3 hours. But I must say it IS a children's book, but it doesn't mean adults and teens can't read it, and it was great! I saw several reviews of it, it seemed good, but I was going to leave it until the last minute, in the end, I gave into curiousity and I was surprised.

It begins in a world, or as it is mentioned in the book, a "community" of people who live perfect lifestyles without colour, pain, sorrow, love, lies and rudeness. It starts with a boy called Jonas who is 11-12 years old. They are ranked for their age, so Jonas was classified as an Eleven, he is about to have his years ceremony for the end of that year, meaning, his job is chosen, not by him, but by others.
In this world, you do not choose your life, it is chosen for you, your spouse is chosen to who you match and your children are also chosen for you. At the Twelve ceremony Jonas' name was not called out, everyone was startled, but at the end the elder calls Jonas up. The elder makes the announcement that he is to be the new reciever, a great honour which is very rare. Jonas is given a folder with puzzling instructions which he never thought he would need, most of them things like "you may ask anyone, anything", and "you may lie". So the next day Jonas comes to training, not knowing what the Reciever actually does, he finds an old man, the previous Receiver. Jonas asks, "what do I call you?" he replies "call me the Giver".
But together the new Receiver (Jonas) and the Giver try to stop the perfect ways of the community and bring back love, colour and emotions to the world. It is an addictive and rather easy read. Great for all ages.
By Pizza
Age 14
Posted by Peter at 03:35 2 comments:

Hi folks I just wanted to welcome Pizza to the team. Pizza will be cross posting some of the reviews from Pizza's Book Discussion over here at Young & Un:Bound.
Posted by Adele at 03:01 1 comment: