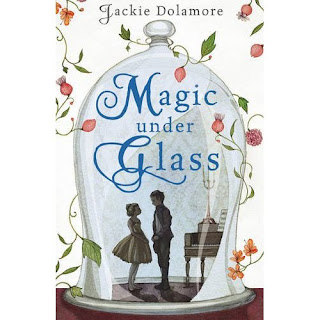 (this is the first post by one of our new reviewers so please giver her the customary warm Un:Bound welcome - Hagelrat).

Magic Under Glass By Jaclyn Dolamore is the best book I have ever read.

It is about a seventeen year old girl called Nimira, she sings and dances in a show that pays very little. When a gentleman named Hollin Parry walks into the show and asks her to work for him, singing alongside a clockwork man who plays the piano, she accepts gratefully.

When she sees the clockwork man or 'Automaton' she notices something strange about it. A few days later when the automaton was wound up, it starting murmuring, Nimira was shocked, she then realised, he was trying to communicate with her by tapping the piano keys. The automaton's name is Erris, and Nimira, finds out he is a fairy prince.

Erris explained that in the midst of a battle, Fairies against Sorcerers, he had been turned into the automaton. A kind Sorcerer called Garvin had found him and had planned to restore Erris to a fairy, but Garvin was killed mysteriously.


Eventually, with the help of Annalie and the mysterious Queen of the longest night, Nimira manages to turn Erris into a human. When Hollin finds out he is furious! For he thinks fairies are all evil. When Smollings takes Erris away, all of them think up a plan and Garvin's spirit enters Annalie to defeat Smollings. Fortunately, Erris is alive but all his clockwork mechanism is opened up. In the end they defeat smollings and are going in search of Erris's sister's husband.

I think this is a brilliant book. Probably aimed at girls, aged 12 - 14

You need a very good imagination for this book otherwise the plot would not make sense. I would love Jaclyn Dolamore to make a sequel to this book as I think the ending suggests another part of the story is needed. I read this book solid in 6 hours and loved it to pieces.

Good Review, nice to come across someone new. I like your spoiler section, I have found that I have to choose my words carefully to not ruin the plot for someone. I may give it a go. Oh yes and Welcome!

Fantastic review! I am really excited about this book and look forward to reading it.

Oh my goodness! I just read about this book! I think it has a controversy with another version of its cover which showed a white girl. This book has definitely made me curious.

Sheila, it sounds good.
Peter S yep the US cover, I think the UK one is cute though and not controversial.