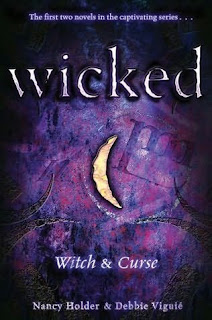 This is a series with five books in it. To start with I was only going to read the third and the fourth, Legacy and Spellbound. I started reading them but I didn’t understand what was going on so I read the first two, Witch and Curse. After I read them and everything made more sense, I was hooked.

It is a story about Holly Cathers who, when her parents die, goes to live with her twin cousins, Amanda and Nicole. Together, they discover that they are witches from the ancient house of Cahors. They get sucked into a feud with the house of Deveraux going back generations. When their lives are threatened, they have no choice but to fight back.

It is an action fantasy and, in some ways, a horror. I loved it. They are quite thick books and you may want to use a bookmark because the chapters are very long. I would recommend them for teenagers (mainly girls) as lots of people die so it might be upsetting for under tens.

I think it is a great series because it was full of suspense and I was desperate to know what would happen next, especially when they were separated from each other because the author made you care about the characters. I would love to read the fifth one.

Ok folks, just popping by to say the lovely Debbie has kindly agreed to be interviewed by Zobdy and PomPom. The interview should be up in a week or so and we will also be giving away a copy of the second volume (books three and four) so check back for that. - Hagelrat